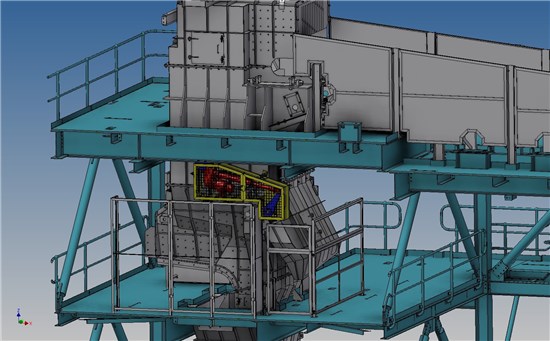 The new sample gate actuator assembly and guards can be seen installed above the existing guarding.

The new sample gate actuator had to be located such that it didn’t interfere with the existing actuator mechanism of the product diverter gate. There was also a restriction on reducing the changes to existing chutework and guards to reduce installation time and costs. Access inside the chute was also very limited causing problems with the assembly of the gate components. 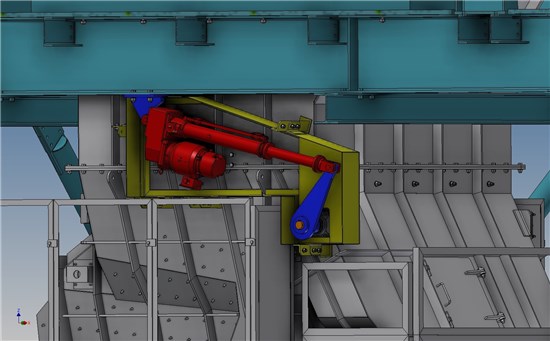 PEA identified a location for the new actuator assembly. The space wasn’t very large however, so there were some redesigns of the actuator and guarding needed to allow for the assembly to fit.

The proposed design was based on the design of the existing diverter gates used on other conveyors but modified to suit the smaller chute on CV05. The assembly of the gate components was designed so that it could be put together from one only as there was no access to the rear of the gate. The guarding was designed to the latest codes so that each piece weighed under 20kgs allowing for a one person lift.

This is an internal view showing the new gate with the curtain plate above it (orange and green). The existing sample cutter chute is shown in blue to show its relationship with the new diverter gate. The existing product diverter gate is visible in front of the new sample gate arrangement. This shows how close it was to the new gate and highlights the problems with finding space for the actuator assembly.

PEA completed the design and fabrication drawings in time for the components to be fabricated and installed during the required shutdown.